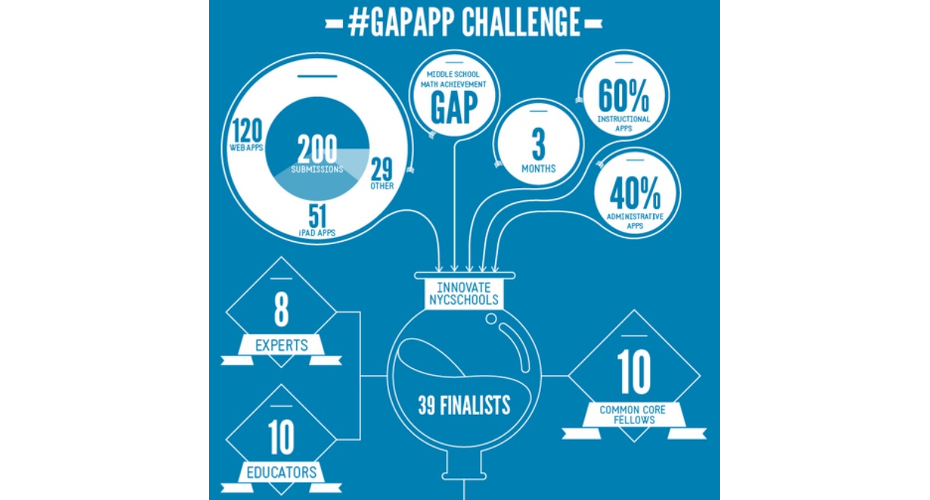 The New York City public school system is a fascinating reporting topic. Did you know that one out of every 50 American children is part of the NYC school system? That the NYCDOE has a $24 billion annual budget?


When you’re talking about NYC schools, size matters. So, it’s been interesting for me to look at NYC schools through the lens of InnovateNYC, a tiny division of the NYCDOE that is both somewhat separate and very aligned with the larger agency. As I explain in this EdSurge story, InnovateNYC is trying to revamp the way the DOE works with vendors, particularly software vendors. The aim is to get better teaching tools into schools by fostering conversations between administrators, teachers and developers.

InnovateNYC’s first big project was the Gap App Challenge, an open call for instructional math apps and administrative/student engagement apps. The competition kicked off in January and accepted submissions until mid-April. Winners were announced in late May at a press conference that I covered for EdSurge.

Many more outreach events have been planned to further connect the DOE with the tech community. Taking developers on field trips to NYC schools is one of InnovateNYC’s more intriguing initiatives. Last week, I tagged along on one of these trips (to two Brooklyn middle schools) and wrote about the experience here.

Some classrooms I observed had integrated technology seamlessly. Other classes struggled. People in edtech often talk about students in the abstract. It was refreshing to see technology in action — problems and all — in real classrooms.